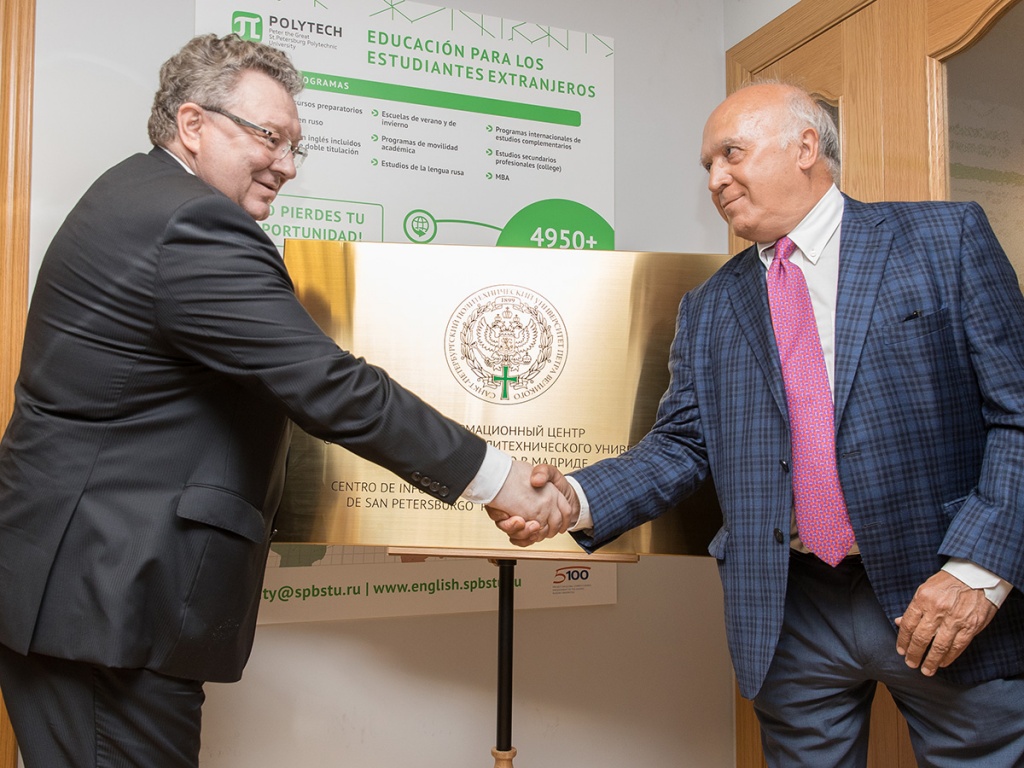 Nowadays the relationship between Peter the Great Polytech University and the universities of Spain are on their high. Russian-Spanish cooperation acquires new oportunities due to the opening of SPbPU Information Center in Madrid. The Information Center launch and the SPbPU Days in Spain at the Polytechnic University of Madrid (UPM) was the main purpose of the Polytech delegation visit starting from April 18 to April 20.

As delegation members there were the following representatives: Rector of SPbPU, academician of RAS Mr. A.I. Rudskoy, Vice-Rector for International Relations Mr. D.G. Arseniev and the Representatives of SPbPU international services, Vice-Rector, press-secretary Mr. D.I. Kuznetsov, the directors of the institutes, Chief Administrative Officer Mr. V.P. Zhivulin, etc. The itinerary of a visit of the SPbPU delegation to Spain had been carefully planned.

As a reminder, on February 16, 2017 during the visit of official delegation from Madrid Rector of SPbPU Mr. A.I. Rudskoy and the Director of the ‘Alexander Pushkin’ foundation in Madrid Mr. A. Chernosvitov signed the cooperation agreement in order to establish relationship development between Polytech and Spanish universities. The talks with Spanish colleagues continued in the course of the visit of the official delegation of St. Petersburg to Madrid headed by the Governor of Saint Petersburg Mr. G.S. Poltavchenko. 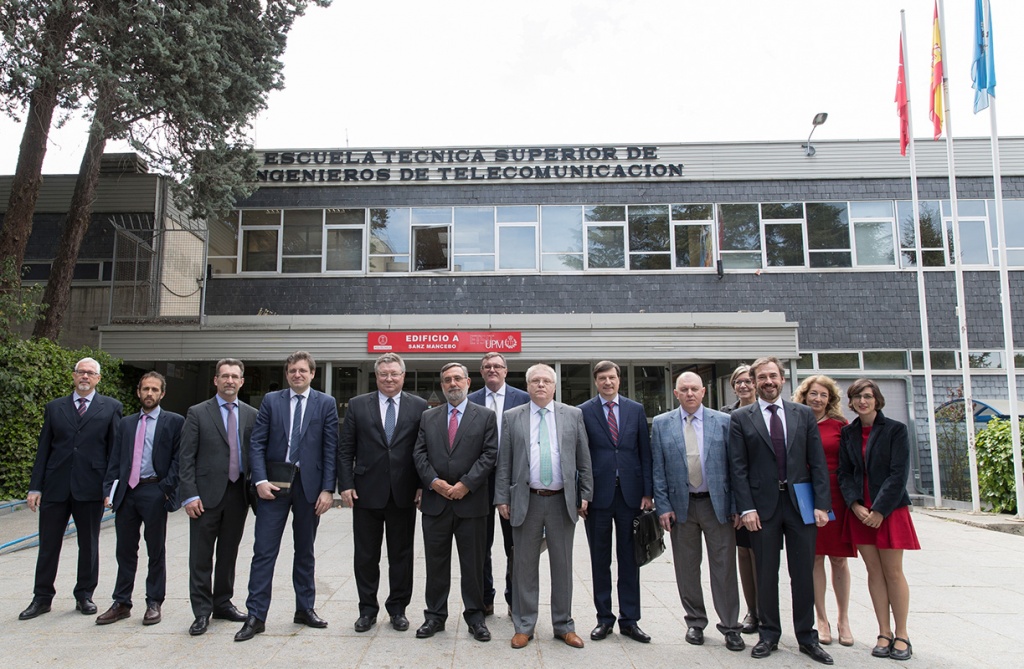 The program of visit of the delegation of SPbPU included not only communication with the representatives of authorities, Embassy of the Russian Federation and Rossotrudnichestvo, International public fund of culture and education and other organizations, but also meetings at specific academic institutions.

The first point of the official program was the visit to the Polytechnic University of Madrid. 'SPbPU Days in Spain' were held. The exhibition was opened as well displaying student art-works of the Department of Engineering Graphics and Design at SPbPU (Institute of Metallurgy, Mechanical Engineering and Transport), and also information banners of Institute of Civil Engineering (ICE), Institute of Physics, Nanotechnology and Telecommunications (IPNT), Institute of Computer Science and Technology (ICST). In the conversation with UPM governance Rector of SPbPU Mr. A.I. Rudskoy made a point of importance of the academic relations between SPbPU and UPM, and particularly noted some prospective lines of collaborative work as civil engineering and energy efficiency, nanotechnology, telecommunications, etc. UPM representatives had the opportunity to discuss the issues of cooperation with the governance of the SPbPU institutes mentioned above: the directors prearranged presentations and briefings about their departments. As a result of the visit to UPM there were signed cooperation agreement between SPbPU and UPM for the next five years and also cooperation agreements between SPbPU institutes (IPNT, ICST, ICE) and UPM schools.

‘People in Spain definitely know that St. Petersburg is a beautiful city and it is famous for its sights and history. But few are aware that here in St. Petersburg is situated one of the oldest technical universities of Russia, which represents technical education of the world level’, – noted Vice-Rector, press-secretary Mr. D.I. Kuznetsov. The fact that now the relations of SPbPU and Spanish universities have disbalance, and outgoing academic mobility greatly exceeds incoming one, comments Vice-Rector for International Relations Mr. D.G. Arseniev. ‘Polytechnic university works to increase the amount of students and visiting professors from Spain’, – said Mr. D.G. Arseniev. The new Information Center in Madrid is aimed to resolve the problem which blocks Russian-Spanish exchange that is a lack of appropriate information. 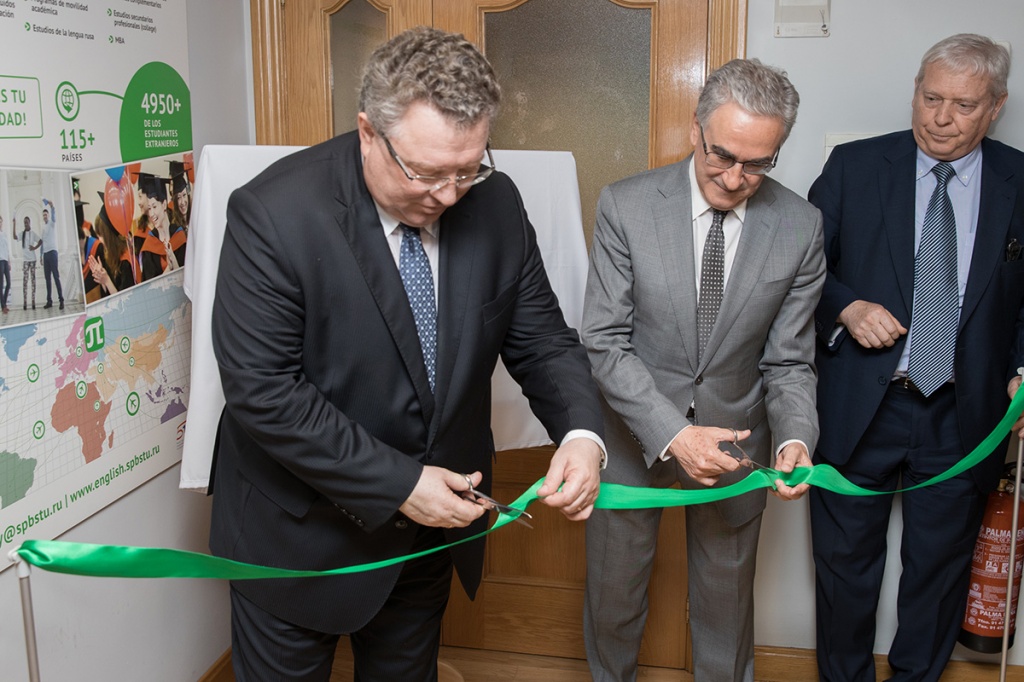 It is important to note that Polytech has already had the experience of international Representation Offices opening. In 2016 SPbPU was the first Russian university which opened its official Representation Office in Shanghai. The next step of Polytech promotion on the world stage is tight cooperation with higher education system in Spain. Over the years Peter the Great St. Petersburg Polytechnic University has been a reliable partner for more than 300 foreign universities, which includes 9 leading Spanish universities. Considering the fact that the majority of world population speaks Chinese, and the second place is taken by Spanish-speaking people, the opening of the official Representation Office in Shanghai and official Information Center in Madrid is not by coincidence. They are overriding priorities in university development.

The opening ceremony of the SPbPU Information Center was held on April 19 on the basis of the Spanish public foundation ‘Alexander Pushkin’, which deals with popularization of Russian language and culture in Spain. It has been contributing to the development of friendly and cooperative relations between Russia and Spain for more than 25 years. There everyone can get information about educational programs of SPbPU, its achievements in scientific areas, enrollment for courses and for Summer school modules. It is also expected that the Information Center will become a meeting venue for Russian and Spanish specialists interested in joint participation in scientific, technical and industrial projects. 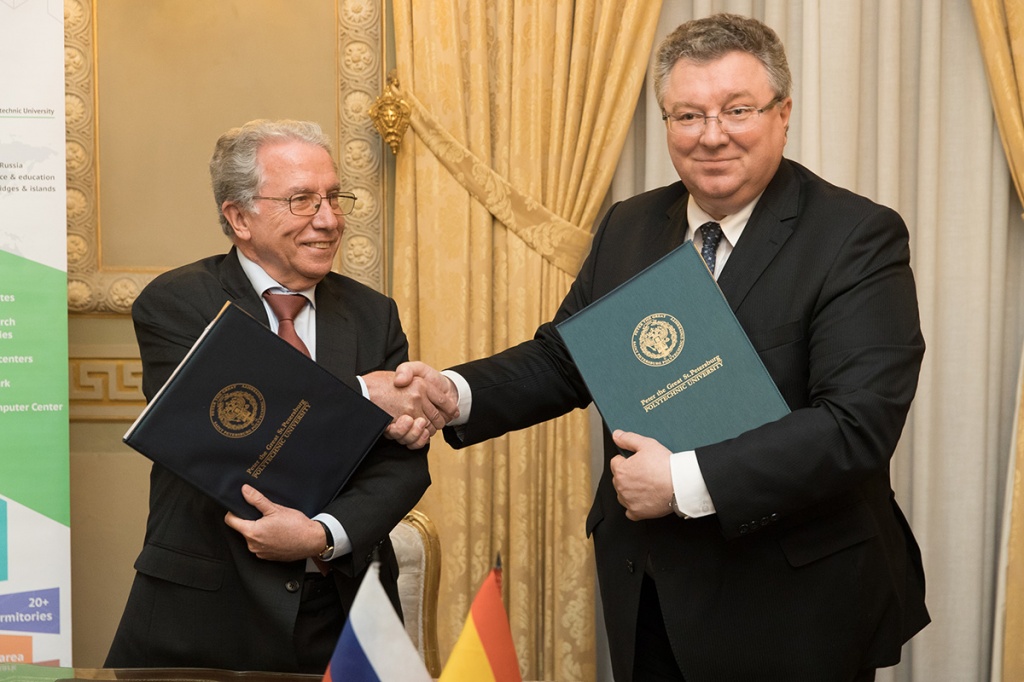 On the occasion of SPbPU Information Center opening and the 'SPbPU Days in Spain' there was a state reception at the Royal Academy of Engineering of Spain. Rector of SPbPU Mr. A.I. Rudskoy told Spanish colleagues about educational process management at Polytech, described the main areas of cooperation with international partners and employers. Also Mr. A.I. Rudskoy reminded about the history of Russian-Spanish relationship, and suggested considering new partnership opportunities and future prospects. As a result of the meeting Rector of SPbPU signed cooperation agreements with Spanish National Research Council, Royal Academy of Engineering of Spain, University if Carlos 3rd, University Alcala de Henares, Collegium of Engineers of Road, Canals and Ports. Also the cooperation agreements with University of Gerona and UPM in the area of students exchange were signed by Vice-Rector for International Relations Mr. D.G. Arseniev.

The pleasant addition to the rich business program of visit of SPbPU delegation was a short sightseeing tour in Madrid and a visit to the Prado in Madrid where the masterpieces of famous Spanish and European artists are presented. 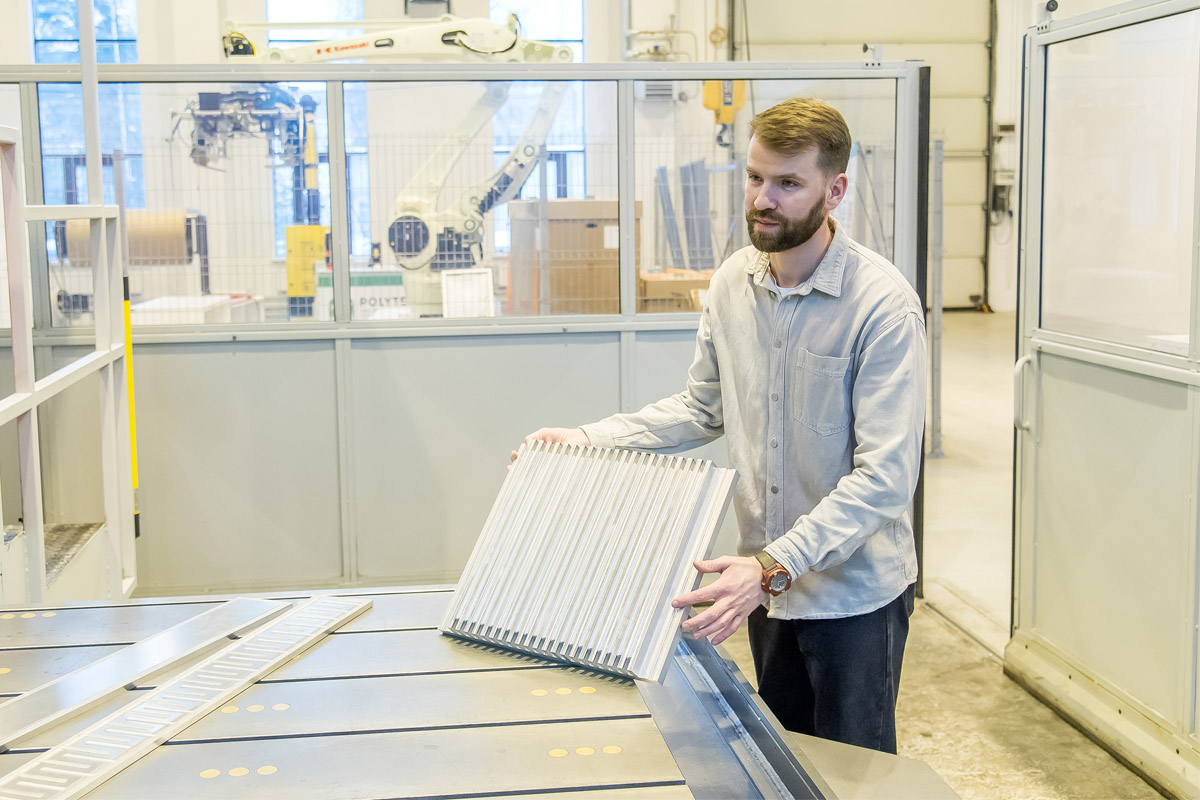 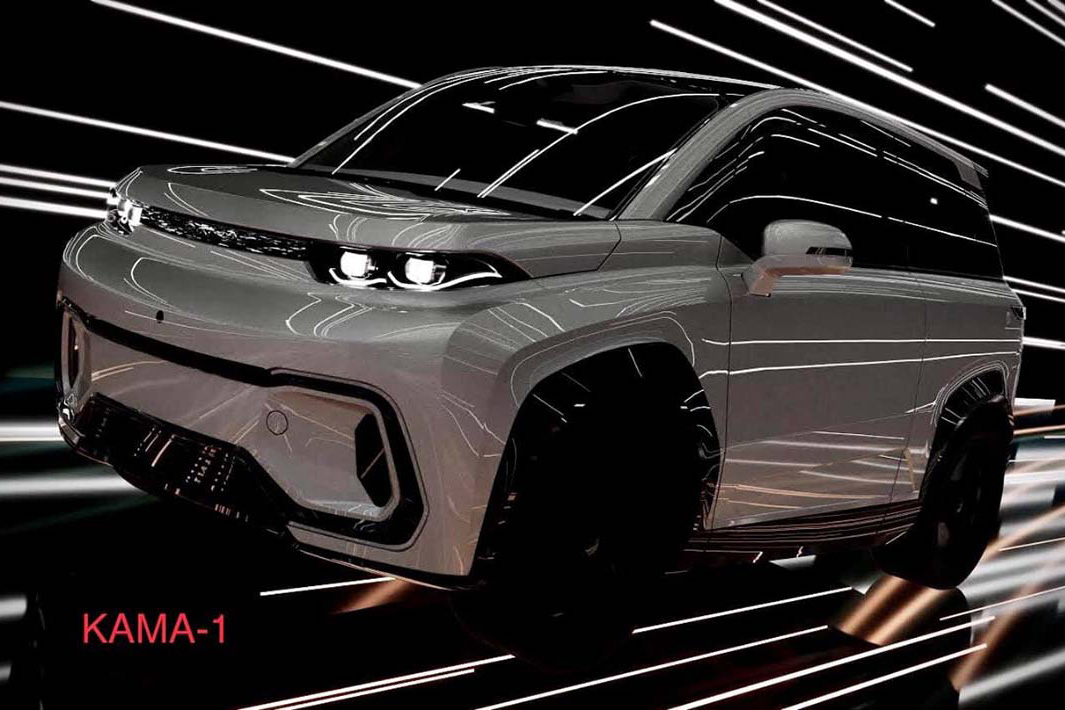